Once known at Cat Guardians as “Scooty”, he was adopted in 1998 and dubbed “Sir Linus of Addison” but commonly goes by Linus.

Linus now lives in Wisconsin and shares his new home with his cat pals Ellie and Shroeder, along with his adopted owners. Linus, however, is no ordinary cat. He has taken to the cat show circuit and on his way to becoming one of Cat Guardians’ most celebrated alumnus.

At his first show, Linus was the top kitten ribbon winner and was awarded “Best of the Best Household Kitten”.

In spite of his successes, Linus has not let fame go to his head, and still leads a pretty normal life. His favorite activities including chasing and wrestling little mice (toy mice, that is) and running up and down the stairs with Ellie.
Congratulations Linus, from your friends at Cat Guardians! 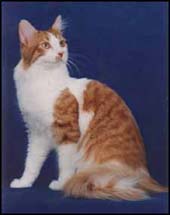