Steel was found wandering our parking lot and actually tried jumping into a volunteer’s truck as she was returning from a vet appointment with another cat. In the beginning, although extremely loving and people-friendly, Steel needed to learn some manners! From the first day, he was always into everything (the toilet paper, the washer, the garbage, the hallway, the desk, the phone cord, and so on – to Steel everything is new, exciting and fun). We finally realized that we needed a never-ending supply of jingle balls to keep him occupied so we could go to the bathroom and do laundry! Finally, after watching playmate, after playmate adopted, Steel went home with his friend Pickles – here’s an update!

We lived with 3 cats for 17 years (the same 3 cats).  In 2009, we lost Tasha (19 yrs. old) in July and Richard (17 years) just before thanksgiving.  We were left with Wesley (now 20 years old) and a german shepherd named Dakota.  A week after thanksgiving we adopted Hector (now 9 years old) from the anti-cruelty society.  Hector and Wesley hit it off right away and are good friends already.

An atmosphere of overwhelming grief and emptiness remained in the house. Richard, in particular had been a very active cat, beloved by the whole neighborhood who were used to seeing him every day taking an afternoon walk. Richard (named for Richard Nixon)  was my very best friend and the parting was difficult for me.

I visited Cat Guardians several times and saw a number of very appealing cats.  On the second visit, a sleek gray named Steel rushed into the bathroom while a volunteer was working and proceeded to unroll the toilet paper rapidly, using paws and mouth.  After being ejected, he lurked near the door, ready to resume the activity at the earliest opportunity.  This image remained with me and I became convinced that this interesting individual was perfect for my household.

At that point, I was faced with the dilemma that an active younger cat may be a little hard on my old guys.  Steel had a little orange playmate named Pickles and I then decided to adopt both of them so that they would play together and leave the old fellows alone.

So far, things are working out very well.  After a brief separation, Wesley and Hector had a discussion with Steel an Pickles during which the house rules were established.  They occasionally have to hiss at the youngsters when they become too rambunctious.

Steel and Pickles are very happy here.  They have a lot of room to play in, many interesting hiding places, and good views of the outdoors.   Wesley is also happy with all the entertainment.  I think he was grieving for his buddies too.    Hector has had the most difficult adjustment.  He lost his home after 8 years in it,  stayed at the anti-cruelty society for 4 months, and is now adjusting to his new home and companions.  He is getting lots of extra attention to make the transition easier.

Dakota the dog likes the newcomers but is somewhat taken aback by the fact that no one is afraid of him.  He has formed an attachment to Pickles and the two play together.

It is a huge relief that both youngsters have sweet dispositions.  My biggest fear was that they would bully my old guys.  But both Steel and Pickles show respect and affection for Hector and Wesley and I really think this will work out.

Am I still grieving?  Yes, of course.  But I cant walk up the stairs without two streaks (one gray, one orange) shooting past me.   And I have to laugh out loud at many of their antics.  Although they have many toys, simple household items are being batted around (sink strainer,  bottle cap…etc. etc. )  They are a constant source of joy and entertainment for the whole family. We are so happy with our new family! 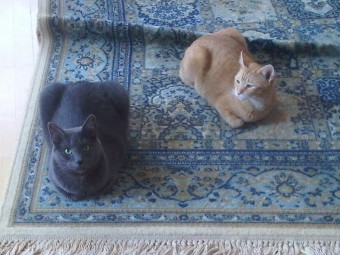